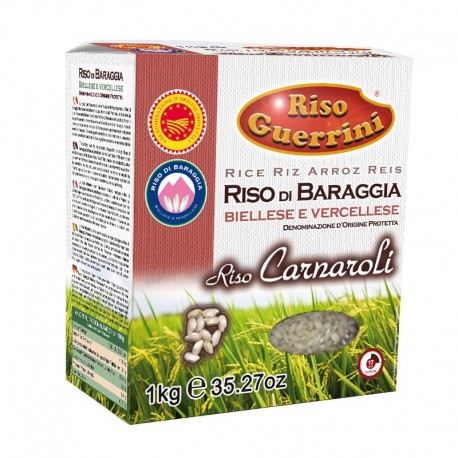 The PDO designation for the rice species «Riso di Baraggia Biellese and Vercellese» refers to the different varieties of cereals of the Oryza sativa L.
species obtained through the processing of rough rice or brown rice, paddy rice or "refined" and «parboiled» rice.
The Baraggia Biellese and Vercellese Rice distinguishes itself because it will not overcook, has a superior texture and slight starchiness, features also
due to lower yields and longer vegetative cycles compared to those found in other zones.
The cultivation of rice in the delimited Baraggia area can be traced to the start of the 16th century and is reported also in notary deeds of the year 1606
in the Municipality of Salussola. In the years that followed, the specificity of this rice was described for about 50 years in the "Riceculture Journal," edited by the former Experimental Insititute of Riceculture of Vercelli, which frequently published technical, scientific articles to explain the characteristics of the product from the Baraggia area. The same Institute in 1931, acquired in the center of the Baraggia area, a rice cultivation company and used it as a research center with the aim of perfecting the specificity of the Baraggia product.
Also the National Rice Agency, in the magazine "Il Riso," in various articles underlined the peculiar quality of the rice produced in this area.
One of the characteristics of the production zone is the difficulty found in leveling the soil due to its particularly clayey-ferrous structure which also
determines different submersion conditions, besides the climate characterised by rather cool summer months, as well as frequent thermic inversions caused by the winds descending from the mountains. Furthermore, the presence of cold waters in the zone, situated at the foot of the Alps, makes this area the first to be irrigated by the mountain streams.